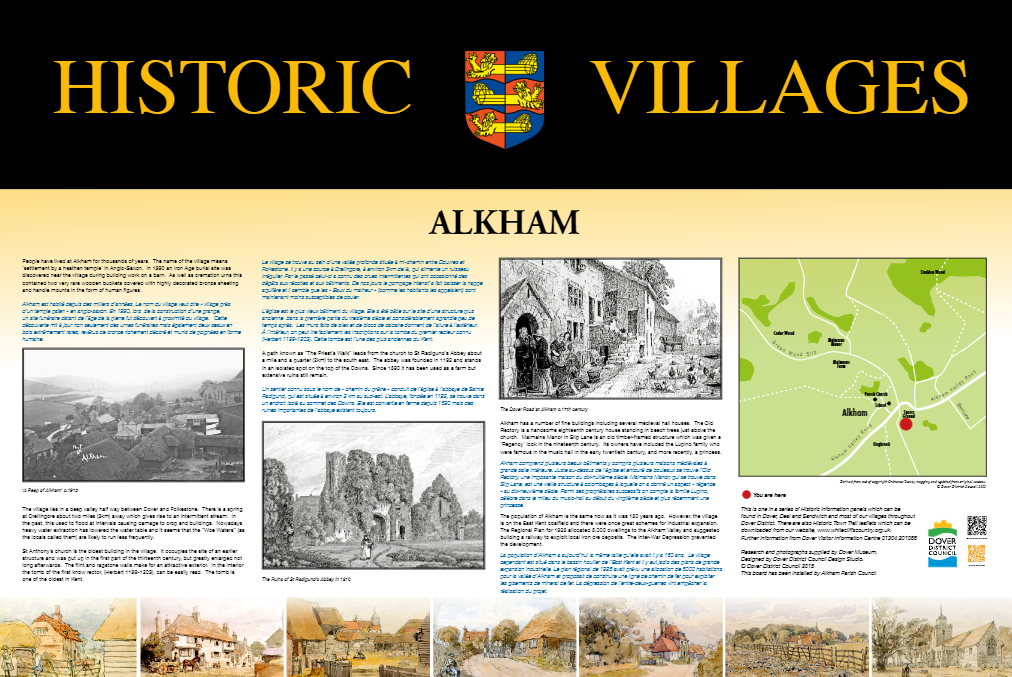 Some 1400 years ago when the Anglo Saxons settled in Kent they established several homesteads in the valley, the most important being ‘Ealh-ham’ which meant a settlement beside a heathen temple.

Alkham as it was later known did not appear in the Domesday Book but in 1093 did appear as a subordinate church to Folkestone.

In the 12th century Henry II gave the barony of Folkestone to the Averanches and in 1263 the village was described as the Manor of Halcham.

Eventually, the manors relinquished their claim on people and as freemen, the majority of the village worked on the land.

Between WWI and WWII Church Alkham, otherwise known as Alkham was extended eastwards and westwards. The first part of the Glebelands estate was built in 1953 and the rest of the estate in 1974.

In the early 1960’s seven houses were built up Slip Lane on land which had belonged to Halton Court, Norton Farm and Box Tree Cottage.

The modern estate in the west of the village was built in the 1990’s on farmland, which belonged to Hogbrook Farm.

A hundred years ago the majority of parishioners worked on the land within their own parish, but today very few work on the farms. The majority now find employment in the towns and ports of Dover and Folkestone.

It is interesting to observe that the population has changed little in number in the last 140 years, whereas the distribution of the age groups has:

Coal was found in east Kent in the late 19th century and the Government thought there was going to be a boom in coal production and Alkham, along with neighbouring valleys, was expected to provide homes for 5000 workers and their families. Locally, drilling was carried out by a French company at Ellinge but overall the coal was found to be difficult to extract and the boom did not occur.

Alkham School thrived until the reorganisation of rural education in 1972, when it closed. It was converted into three private cottages and the playground remains as a parking area in front of the Old Post Office, which used to be the local shop.

The latter was built at the beginning of the 20th century by Frederick Tunbridge, for his wife, Mary Jane. In the 1920’s it became a Post Office and finally closed in 1978 when it became a private house.

The old shop remains very much as it was, apart from the front façade and was used by the parish for meetings in early 2001 when the village hall was flooded.

The flooding of Alkham is due to the Drellingore Nailbourne, which is an underground spring that rises at Drellingore when the water table reaches a certain level.

In the floods of 2000/2001, the nailbourne flowed with the result that the road through the village was flooded. The village green was turned into a large lake and was home to ducks, dogs, and children for many months. With an apparent 13 year cycle, the village flooded again in 2014.

The spring used to be known as the Woe Waters because of the problems, which it caused along the valley.

There is a lovely Georgian style, late 17th century Rectory in the village and also a Vicarage.

The Vicarage was bought by the church in 1864 and remained so up until 1978. Both properties are now private residences.

There were also two Wesleyan Chapels in the village, one was pulled down and the other converted to a private house in the 1960’s.

The Marquis of Granby, now known as Marquis, stands next to Forstall Cottage, which in the mid-nineteenth century was a public house called the Fox and Goose.

The Marquis of Granby was owned privately when it was built in 1810 but in 1928 it was bought by Fremlins Brewery. The pub also served as a shop and a meeting place in its early years and was next door to the village well. The pub passed into private ownership and in 2008 became a high-class hotel and restaurant.

There was another pub at South Alkham called the Carpenters Arms but this closed some years ago when it went into the ownership of Whitbread.

Alkham Cricket Club is still in existence, having been formed over 150 years ago and home matches are played on the village green. The latter is properly known as Vicarage Meadow as it was owned by the church but it was purchased by the parish council in 2003.

In the 1980’s an Iron Age cremation bucket was found near the church in Alkham and it now resides in a London Museum. The Alkham Valley Historical Research Group is carrying out further archaeological in the valley and if you would like to find out more details please access their website: www.alkhamarchaeology.co.uk